It may be a bit early to call, but the greatly constrained supply of homes in the valley has started to ease a bit.Â  For those who follow the actual real estate trends in the valley (not the usually misstated national news) this year began with supply dropping precipitously.Â  The effect of the constrained supply without an equally corresponding drop in demand contributed to a huge pricing push.Â  But the third quarter typically brings seasonal adjustments in demand â€“ and this year is no exception.Â  The local news and real estate community has overall done a decent job on getting the word out that values are up and supply down.Â  That has encouraged sellers to consider moving from bystanders to players again.Â  So more traditional sellers have re-entered the 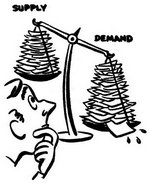 market while demand has done the seasonal slowing.Â  This is encouraging news for buyers who have been experiencing huge frustrations on trying to buy a home.Â  Now, easing supply does not mean that it is a cake walk for buyers.Â  It simply means that the tightened supply has eased a bit.

One last comment on pricing, while the price rise has momentarily slowed due to the supply and seasonal adjustments, it would still appear that prices are likely to rise next year.Â  Particularly in new builds (the current solution for frustrated re-sale buyers) builders are anticipating next yearâ€™s pricing to be up close to 20%.Â  So the mantra remains the same for the year â€“ if you want to buy, do so now.

The two biggest and most tenacious rumors in the valleyâ€™s real estate market appear to be:Â  foreclosures are rising and there is a â€œshadow inventoryâ€ of foreclosed homes the banks are waiting to release.Â  These are false â€“ despite all the news reports that tend to support such nonsense.

Foreclosures are down significantly in the valley and while we still get the occasional tiny blip up now and again, the trend has been consistently and dramatically down since the start of the year.Â  Comparing the number of foreclosed homes for sale in January of 2012 to January of 2009 â€“ the supply is down 92%. Yes there will always be foreclosures, as sadly the number never goes to zero.Â  However, the numbers are consistently dropping and dramatically with nothing indicating that trend will not continue.

That leads us to the second rumor â€“ shadow inventory.Â  Shadow inventory is defined numerous ways, but the most common definition is homes that the banks have taken back and are holding off the marketplace. The banks in Arizona do not have some â€œsecret stashâ€ of houses they are holding back.Â  Why can we state this as fact? The beautiful thing about real estate is that changes of ownership cannot occur in secret – they require a public recordation to transfer ownership. So this persistent rumor is more attributable to errors in counting and tracking foreclosures than anything factual.