For those who prefer an article in a Twitter-like format â€“ supply is still constrained, demand appears to be slowing (is this seasonal or an actual 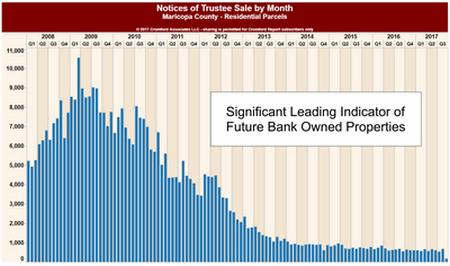 decrease?) and we are in the midst of a very â€œnormalâ€ market. For those who prefer details, continue on.

The problem with a â€œnormalâ€ market is that the Valley went through such an extended period that was NOT normal (2004-2011). Long periods of abnormality can start to feel like the new normal â€“ so when normal actually shows up it is apparently unrecognizable as such. Homeowners are understandably confused when reading inflammatory housing headlines meant to snag readers. Headlines such as â€œThe Valley is in a Normal Real Estate Marketâ€ is a snooze fest so donâ€™t be startled when various news sources claim otherwise. To site a few recent examples, Ed Delgado, President and CEO of Five Star announced at a conference for â€œforeclosure specialistsâ€ that foreclosures are going to go up in a number of cities, one of which was Phoenix. Much to the contrary, delinquencies in the valley are lower than any time since 2002, to have foreclosures you must first have delinquencies. Forbes also recently published a headline â€œ58% of Homeowners think the housing market is set for a correction â€“are Bubble Fears Founded?â€ To answer the question â€“ no – bubble fears in the valley are not founded. Housing Wire similarly states that Phoenix is one of the states â€œoverheatedâ€ and â€œoverpriced by double digitsâ€. Hmmm â€“ interesting theory but again not factual.

So to state the facts again (our apologies to those who believed us the first time we spoke to this issue) we are in a normal market. Supply, when constrained comparative to demand, causes prices to rise. Rising prices cause supply to rise and demand to dampen, resulting in a leveling off of appreciation as supply and demand begin to balance or even correct to the buyerâ€™s advantage. Real estate typically goes in cycles of this pattern over and over â€“ the question is only how long each cycle will last. To summarize the current state of the market, we turn to the Cromford Report:

Supply remains lower than last year, but the gap closed slightly compared with last month in terms of active listings with no contract. We are starting to see more new listings than last year. The third quarter is up 2.5% from last year and up 5.5% from 2015. So far the extra supply is not having much effect, but if it continues for several months finding a property could start to get a little easier for buyers.

The monthly sales rate is up only 1.8% compared with a year ago. Both August 2016 and August 2017 had the same number of working days (23) so we have a fair comparison to draw. Since the year over year growth was 5.7% in June and 3.0% in July we again see a continuing slow downward trend in the advantage that 2017 has over 2016 in sales volume. Growth in the annual sales rate has almost stopped with 95,000 proving to be a difficult line of resistance. All these point to a gradual fading of demand. The serious shortage of supply obscures that fadeâ€¦

We still have a seller’s market in most locations and price ranges, but the current trends means the seller’s advantage has very little momentum. Before buyer`s get too excited, the trends are very mild in nature. As such we do not currently see major increases in buyer’s bargaining power coming anytime soon.

A further interesting Cromford Report discussion point is does a normal market mean the valley has â€œrecoveredâ€? The Report brilliantly speaks to this point:

â€¦Many people assume when prices have returned to 2006 peak levels then the market has recovered. However understandable, especially for those who purchased during that time frame, thatâ€™s not necessarily the case. Average sale prices per square foot are still 27% away from the peak of 2006. However, the market could arguably be considered recovered once prices reach the range that corresponds to the long term average rate of inflation, which from 2000-2016 in the United States is 2%. In 2000, the average sales price per square foot for MLS resales was $96. Had the bubble and crash never happened, and annual appreciation stayed between 2-3% per year as normal, then prices would land between $134-$158 per square foot today. Currently theyâ€™re running at $149, which equates to averaging nearly 2.6% annually and a 55% total gain since the year 2000.

So normal and recovered seem to be hand in hand in the valley. That should be good news for jittery homeowners reading way too many headlines. As always, we are here to help you understand your home in todayâ€™s marketplace. We appreciate and welcome your questions and comments.