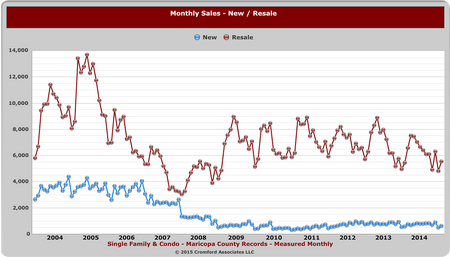 The early suspicions that 2015 might actually see an increase in demand are finally proving to be fact.Â  In real estate, improvement in a market goes from the bottom up, rather than from the top down.Â  This means that to stimulate a market place (i.e. see price improvement and a high volume of turnover) you need the entry level buyer to show up in force.Â  That purchase then allows for the seller to buy their next home, which then allows that seller to buy and so on.Â  It is said that the first time home buyer can spark a domino effect of 7 sales on average.Â  This was the thought process that spurred the dubious tax credit back in 2009.Â  The government seeing that the housing market was in severe meltdown mode, decided to stimulate the first time home buyers through a purchaser tax credit.Â  In one sense it worked â€“ first time home buyers started buying.Â  In another sense, it was an utter failure. Unlike a â€œnormalâ€ housing domino effect, in the distressed market it simply meant that the first time buyer bought the foreclosed home or short sale â€“ spurring exactly nothing.Â  Once the tax credit expired and the artificial stimulation of the market ended, the market dipped and simply reverted to the full blown distress market.

Fast forward to todayâ€™s market which for the last year and a half has stubbornly remained in the doldrums. In that time an abnormally low number of homes exchanged hands despite extremely favorable interest rates and flat pricing.Â  The only thing that saved that market from becoming a strong buyers market is that sellers disappeared at the same time the buyers did.Â  So the recent spike in demand is a welcome one.Â  But even welcome changes bring challenges, demand is not spiking in all areas and price points â€“ and demand changes much more quickly than supply can. The areas and price points that are currently adding supply are not where the demand is strongest.Â  AsÂ  Michael Orr of the Cromford Report recently so succinctly stated :

â€œDemand is up strongly for the lower and middle price ranges but new supply is heavily skewed towards the higher price ranges, where demand is actually lower than last year. As a result, sellers of properties over $800,000 are facing stronger competition from other sellers. Sellers below this price point are in a much more favorable position than last year, particularly those with homes priced below $400,000.

Meanwhile inventory for the first time home buyer is in short supply and contract ratios for the well-located areas that are dominated by such homes are headed into “frenzy” territory.â€

So does this â€œfrenzyâ€ mean that prices are immediately rising?Â  No.Â  As weâ€™ve mentioned in the past, price is a trailing indicator.Â  It will likely take a few months to begin showing up in pricing â€“ but price improvements do seem to be on their way.Â  That is very good news for sellers and a strong nudge to buyers to get buying sooner than later.