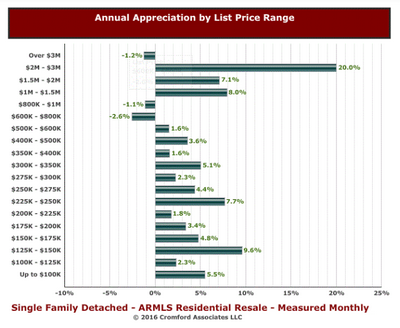 lackluster activity levels in January. But as we warned, trends take time to form, and so a good or bad month does not make a year. 2016 had been heralded by most to be a likely breakout year. Demand was expected to leap due to the continuing rise in rental rates, the boomerang buyers returning to the market (those who lost their homes and return to buy after credit recovery), Millennials beginning to buy, and the valleyâ€™s overall positive net migration. Despite the compelling reasons for a demand surge, the indicators so far have been underwhelming. Demand has remained in a pretty neutral range, neither retreating nor advancing significantly. The number of homes under contract is higher in 2016 than in the same time in 2015 by approximately 8%. That would be encouraging if that % was growing rather than eroding.

Interestingly the purchasers are much more dominated by local buyers â€“ up by about 18%. Buyers with out of state addresses are running 8% less as they did in 2015. Anyone tracking the weakened Canadian dollar will understand why very few Canadians are buying these days â€“ down 64% compared to January 2015 (but they are wisely selling â€“ up 26% from a year ago).

The new listings to market are up over 2015 by 6.2%. This is higher than 2014 and 2013 as well – notoriously low years for homes coming to market. The low rate of homes coming to market in the last 3 years was the marketâ€™s saving grace (at least for sellers) given that demand was also lower than normal. With demand in neutral, a continuing arrival of new inventory is starting to shift the balance of the market in some areas and price points. Michael Orr of the Cromford Report offers this interesting breakdown by cities:

The active listing count has increased in all the major cities, as is normal for the time of year, but the largest percentage monthly increases are in:

These increases give buyers a lot more choice. Scottsdale now has more active listings (including UCB) that at any time since 2011.

Queen Creek stands out by having the smallest increase of less than 2%, unusually low for the time of year.

Among the secondary cities the fastest growing active listing counts are in:

Conspicuously slow growth in active listings can be seen in:

Despite these geographically supply shifts, we cannot overemphasize that price point is still a major factor in the supply/demand analysis. Below 200K, we still see very constrained inventory with multiple offers being the norm. Even with demand in neutral, it is outpacing and exceeding supply. We see no relief in sight at the moment.

We will continue to watch 2016 and report the trends that affect our clients. As always, we are here to evaluate your particular neighborhood and provide a supply/demand analysis so you can make informed decisions.