Spring is here, bringing not only spring breakers but also the real estate spring â€œbuying seasonâ€.Â  Real estate is cyclical – in both long term and short term 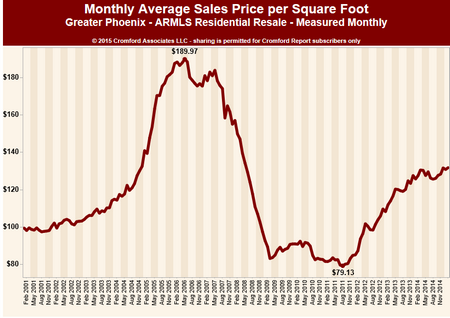 trends.Â  Annual trends typically follow the same pattern year after year.Â  Demand begins picking up in February, continues to climb to the peak in May then remains at this peak thru July (yes, even with our summers) and falling as it approaches the end of the year.Â  Because of this, the first signals for the yearâ€™s pattern really begin to emerge near the end of February.

As pricing and the health of the market depend solidly on supply and demand, we tend to focus our lens solely on those two factors.Â  Letâ€™s begin first with supply.Â  In 2014 sellers were placing their homes on the market at very low levels.Â  2015 has continued that trend to date.Â  In fact, supply is actually weaker than this time last year.Â  The supply of short sales is down 38% and is continuing to fall.Â  REO (foreclosed) properties are down a whopping 49.6%.Â  If the supply of active listings continues to remain at low levels, this should bode well for sellers and actually result in some upward price movement in the second half of the year.Â  While we can speculate as to exactly why sellers are not coming to market in great numbers (i.e. distress properties are diminishing, sellers who survived the distress market still lack sufficient equity, etc.) the fact is they simply are not.Â  Given the recent jump in FHA refinances due to changes in the mortgage insurance premiums (the Mortgage Bankers Association reports a rise of 76.5% of FHA refinances at the end of January) if one were looking for proof that sellers are staying put, the level of refinancing seems to provide that proof.Â  So if the story of supply can be summarized by the word â€œconstrainedâ€, how is demand shaping up by comparison?

The good news is that demand is far more robust than supply.Â  While demand seemed to be in a deepfreeze in January and the early part of February, the later part of February saw a very different story.Â  As Michael Orr of the Cromford Report so perfectly states:

â€œSince the Super Bowl ended we have seen the liveliest two weeks for demand for a long time and we can see several areas with very strong numbers of listings under contract compared with this time last year.Â  The most popular ranges are $150,000 to $600,000, which is good news for developers and for sellers of existing homes. Here we see a very sudden upswing in buyer interest that wasn’t there in Januaryâ€¦

We have not seen such a large percentage increase between January 15 and February 15 since 2009 when investors started to snap up the low hanging REO fruit.

As usual the recovery is not spread evenlyâ€¦

Our first observation is that the price ranges

are the ones that are very hot and are seeing a large spike in listings going under contract. There were more normal listings under contract on February 14 than there were at any time during 2015 for these three price ranges.â€