As we approach the last quarter, we have a few benchmarks that reveal market trends this year. Rather than trying to sweep 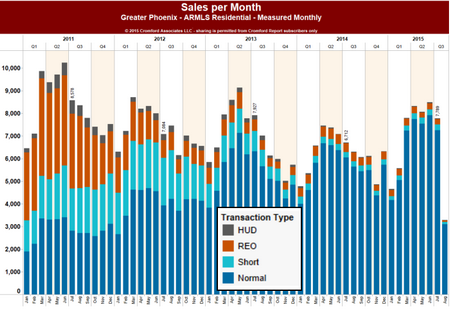 this in to one cohesive thought â€“ we simply offer you some observations in no particular order of importance.

Much like our weather, the real estate market has â€œseasonal patternsâ€™. Keep this in mind when the headlines scream â€œthe real estate market is decliningâ€ as they often report in the back half of the year. Two things happen once the spring buying season is over, less luxury homes sell (thereby dropping the average price per square foot of sales â€“ as smaller and less expensive homes dominate the mix) and the volume of home sales begin to gradiently taper monthly as we head towards the end of the year. These two factors can look like a â€œdeclining marketâ€ rather than a yearly seasonal pattern that is both expected and normal. As our local real estate guru Michael Orr of the Cromford Report comments:

â€œSo the apparent drop in pricing in the overall market is an illusion. The real cause is a big shift in the luxury market with strong sales of homes under $1 million compensating for weaker sales over $2 million. This is a normal pattern every year, but this summer the effect is particularly strong because the super-luxury homes had such a successful spring season.â€

The Luxury market performed very well the first half of the year.

Although typically posting the smallest number of sales in the market, the luxury market still has the power to fascinate. Fascinate it did this year, posting some remarkable numbers. Here is what Michael Orr shared about July (a month that often is a rather tepid one for luxury sales as those buyers typically flee for cooler climates):

â€œLuxury single-family home sales in the Northeast Valley remained surprisingly strong during July 2015. There were 354 closed transactions over $500,000 in the Northeast Valley though ARMLS, up 25% from last year. Almost all the strength was concentrated in ranges below $1 million. Over $1 million, sales were up only 2% while between $800,000 and $1 million sales rose an astonishing 69%. The top end went suddenly quiet with only 5 closed sales over $3 million, down from 16 in June. Unit sales over $500,000 were the second highest we have seen for any July since 2000 with July 2005 still holding the record at 479.â€

The supply/demand front remains much as it has this entire year. New listings coming to market are still very weak when compared to historic trends. In fact 2013, 2014, and 2015 all posted anemic amounts of homes for sale. While agents bemoan this trend (after all, who wants a store with nothing on the shelves?) it has actually been beneficial to sellers. This yearâ€™s normal demand levels juxtaposed against the below average supply – led to very constricted supply in some price ranges and areas. This helped prices not only stabilize, but in most cases to gently increase.

â€œOverall demand is nothing special, but it is still much stronger than last year. Supply remains weak overall and although new listings are arriving at about a 5% higher pace than last year, this is well below long term average levelsâ€¦

â€¦ We may see a little more supply over the next few months for the popular ranges between $150,000 and $400,000. This may in turn bring a little welcome relief for the average buyer and stop the market getting even more favorable for sellers.â€Â Â Â Â Â Â  -Michael Orr

This is a rather controversial subject â€“ as solar leasing companies have done a very good job in selling the 21st century solar which is dramatically different from the 20th century solar some of us (cough) are old enough to recall. While â€œgoing greenâ€ is a wonderful ecological trend and one we happily support, we are often asked â€œwill a solar lease add value to my homeâ€? Sadly we must report the answer is â€œnoâ€. In fact, our experience thus far indicates just the opposite. Buyers may happily accept a â€œno strings attachedâ€ solar unit (i.e. one that is owned by the seller) leases however pose a challenge. First, the buyer must qualify for the lease â€“ not only in terms of credit worthiness, but also it must be factored in to their debt/income ratios. Secondly, buyers seem to dislike the idea of a long term commitment (many leases are 30 years) that they cannot be freed from. These factors not only fail to increase value, but in some cases prohibit a sale or even slightly reduce the value of the home. While this is not a popular answer, it is the current reality. Perhaps this will shift with time. Only time will tell.

So there are few tidbits about our current market trends. As always, we will strive to keep you posted on the shifts that continue to â€œnormalizeâ€ our market.