Happy 2015! However tardy, we had to add our best wishes for a wonderful new year.Â  2015 has been a year long awaited by the real estate industry â€“ as 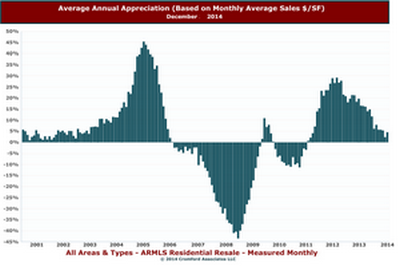 many speculated in the last few years that real estate would boom in 2015.Â  So will 2015 in fact be the gangbuster year dreamed of?Â  Given the tumultuous past we have navigated, we are loathe to make predictions.Â Â Â  As Yogi Berra so famously stated â€œThe future ainâ€™t what it used to be.â€œ But, we are seeing early signs of improvement in demand.

As we mentioned in past articles, the lack of demand in our market (and frankly across the country) has been the story of 2014.Â  Oddly enough, the saving grace was that supply was also constrained at the same time.Â  Buyers didnâ€™t (or couldnâ€™t) buy and sellers were scarce and did not put their homes on the market at expected levels. So 2014 became a low volume market â€“ meaning lower than â€œnormalâ€ levels of home changing occurred. The signal we have been watching for is improvement in demand.Â  Apparently Santa was listening because in December the first signs of improvement in demand began to trickle in.Â  To quote our favorite real estate guru Michael Orr â€œWhen comparing 2013 and 2014 we can see that 2014 has been weaker than 2013 for most of the year but has recently improved. The difference is not great but I find it convincing evidence that a slow improvement has started.â€Â  Locally, the first few weeks of December showed the highest number for home sales for the same period since 2006.Â Â  Trends by their nature must extend past a few weeks but these are the early signals (we hope) of what is to come.

Another possible factor behind demand picking up is the lack of rental supply.Â  Finding homes to rent under $1000 monthly has become truly a challenge and at some point this lack of rentals will cause either more low end apartments to be built or cause renters to become buyers.Â  Could the recent improvement in demand be the first signs of renters becoming buyers?Â  We certainly hope so.

Lending seems to be the primary culprit behind 2014â€™s lack of demand.Â  Add to that an economy still struggling to right itself, and the debt load carried by most consumers, and itâ€™s not too hard to see why demand has been constrained.Â  We feel confident that it is a matter of time until the lending community responds to the lack of programs for buyers.Â  In fact, we are starting to see the first signs of the lending issues being addressed.Â  Fannie Mae and Freddie Mac announced a program for first time home buyers that allows for a 3% down payment and lends up to $417,000 (currently FHA is 3.5% down and only lends up to $271,050 in the valley).Â  Add in the remarkably low interest rates (currently at less than half the historic average of 8.5%) and lending certainly is poised for improvement.Â  At the end of the day, lenders must lend to make money.

A possible additional bonus to the local market is the Super Bowl.Â  Whether imagined or real as a real estate boon, approximately 90,000 additional people are heading to Phoenix.Â  There can be little downside for our market to have that many valley visitors.

If demand truly begins to pick up steam, we could see 2015 convert back to a seller market. Of course, the one lesson the last ten years has taught us is nothing is for certain. No matter what happens, we will strive to keep you aware of the ever changing market. Hereâ€™s to a great 2015!